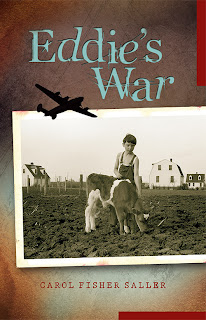 “Braiding the Verse Novel”  is a series of interviews I did with writers of novels –  and one biography  - in verse.  We had our conversations over the summer of 2012. I’ve written articles about verse novels for School Library Journal and NH Writer which draw on these conversations in different ways.  Here, I’m posting the full responses from each of the writers who allowed me to ask them questions.  Nearly everyone who has read my novel, The Good Braider, asked me why I wrote in the spare lines of verse.  My readers’ questions have caused me to explore my own craft and then to explore the question with these articulate, generous writers. Each week I will feature a new novelist.  Many writers I talked with represent different cultures or different periods in history. I begin with Carol Fisher Saller.
Edide’s War by Carol Fisher Saller is a novel in poems.  Each of Carol’s poems could  stand alone as a character portrait or vignette.  ”A poignant look at boyhood before and during the long years of World War II,” writes Kirkus in a starred review.
1. Would you select a few lines from a verse and tell about a choice you made in the craft of those lines?  How did you shape them to achieve something essential to the story?
There were two difficult choices I had to make in writing Eddie’s War: first, whether to write in straight prose paragraphs or in the more stark, short lines that were calling to me, and second, whether to write in first or third person. More than one reader told me I’d be better off with third-person paragraphs. But compare these two versions of the same passage:
(Before)
One summer when Eddie was helping Thomas cut thistles in the bottoms, they heard snuffles and whines and followed the sounds. On his knees, Thomas dug into the side of the hill, into the den, and handed them out, one by one, little foxes, small and soft and wriggling. The boys used their shirttails to hold the kits, four in all.
(After)
When the Hindenburg caught fire
and fell out of the sky,
I saw the pictures
in the paper.
“I seen ’em, Tom,” I was saying,
out south cutting thistles,
“people jumping out
an’ it still up in the air”—
But Thomas looked up,
said hush.
There was whining
somewhere in the grass.
We followed the sounds.
On his knees Thomas dug with his hands
into the hill
into the den,
handed them out one by one,
little foxes.
To me, the first passage just plops along: This. Then. That. The second passage puts us right there with Eddie, looks through his eyes, gives him a voice, a personality, then makes us wait along with him—the short lines delay and build—to see what will come out of the hill. We wait for Thomas to turn and hand us . . . what? I finally thought, what the heck, who cares if this sells, and I wrote it the way I wanted to.


2. Can you draw a parallel between your use of verses and style of verses to create the novel and cultural  traditions of the community you write about. The term cultural could refer to the time period, to war, to a family, or other culture.
I hope that some of my vignettes evoke the sound and rhythm of country speech and another era. The short lines slow everything down and allow for the kind of terseness or shyness that several of my characters have. I suppose my form (I don’t think of it as verse) is imitative in some ways: I have a powerful admiration for Karen Hesse’s work, Out of the Dust, for instance.
3. Would you suggest that there is a kind of story that is best suited to the verse novel form?
I think the form lends itself to any kind of story, but not to just any kind of storytelling. It’s for when the teller wants to tread carefully, choose each word, edit, hone, listen for clinkers, and push until it’s right. But I don’t see why it couldn’t work just as well for distopian fantasy or urban grit or even middle-grade humor. In another project I’m working on, my main character is a modern-day girl who is impulsive and brash, and it never even occurred to me to write in short lines, because that’s not the way I want to tell her story.
4.  What’s an ingredient in a verse novel that makes you fall in love with it?
For me it’s pacing within and among the sentences, the way they ebb and flow. I think each person finds certain rhythms and sounds and pacing to be especially pleasing, and when I read a novel whose narrative style clicks with me, it’s like that writer is singing my song. I had that experience reading In an Uncharted Country, by Clifford Garstang. Maybe because Cliff and I both lived in central Illinois for years as kids (he’s a friend from high school), we share an ear. His book isn’t a novel in verse, but it could be, it’s that lyrical.

Posted by The Elephant Rag at 2:50 PM

The Elephant Rag
Welcome! I'm Terry Farish. I write for children and teens and coordinate Connections, the literacy program of the New Hampshire Humanities Council. The Elephant Rag is about books for children and teens from many cultures, and follows the Humanities Council project to create a Nepali-English picture book with new Americans from Bhutan. My first job was in Vietnam and ever since I've been interested in stories from many cultures. Write me a message from your corner of the world!

On Writing for Teens and Children Across Borders